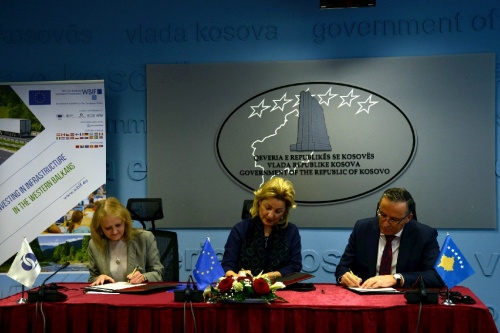 The second grant agreement for Kosovo under the Connectivity Agenda was signed today by representatives of the European Union, Kosovo, and the European Bank for Reconstruction and Development. The grant has leveraged an overall investment in excess of €42 million and will support the rehabilitation of Rail Route 10 Phase 2, on the Orient/East-Med Corridor.

The €17.6 million EU grant is the second grant approved under the Connectivity Agenda for the rehabilitation of Rail Route 10 on Orient/East-Med Corridor in Kosovo. It complements the grant approved under the 2015 Connectivity Agenda investment package for the rehabilitation of the railway section between Fushë Kosovë/Kosovo Polje and the border with the former Yugoslav Republic of Macedonia, Phase 1, and follows loans of €39.9 million and €42 million made in 2015 by the EBRD and EIB respectively, to finance all three phases of the work.

This new grant will cover 49% of the works for the rehabilitation of 35 km of railway track and 5 railway stations on the section between Fushë Kosovë/ Kosovo Polje and Mitrovicë/Mitrovica. The project has also benefited from a €1.5 million grant from the WBIF Bilateral Donors and EBRD to cover the preparation of design, tender documents and project implementation support. In addition, the EU has provided a €0.5 million grant for the preparation of the feasibility study along the entire Route 10.

The detailed design and tender dossier for Phase 2 are close to completion and construction could hence start in the third quarter of 2019 and be finalised by the end of 2024. Once complete, the project will ensure secure and efficient rail transport for approximately 50% of the population of Kosovo.

On the occasion of the grant signature, Kosovo, European Commission, and EBRD signatories maintained:

Additional information on the project as well as on the WBIF operations in Kosovo can be found here and here.