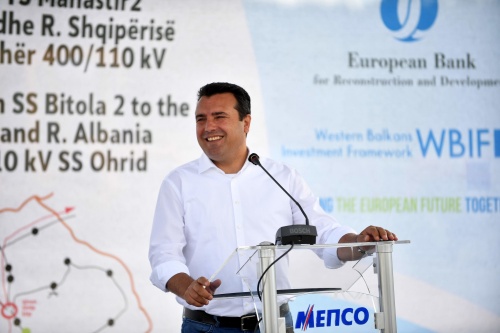 Construction Starts on Electricity Interconnector Between Albania and North Macedonia

Work has started on the construction of a new power substation in Ohrid, a key component of the first electricity interconnector between Albania and North Macedonia, which will range from Bitola in North Macedonia to Elbasan in Albania. The project, financed by the European Union (EU) and the European Bank for Reconstruction and Development (EBRD) is part of the EU’s initiative to establish an East-West electricity transmission corridor between Bulgaria, North Macedonia, Albania, Montenegro and Italy. The start of construction works was marked on Sunday in Ohrid in the presence of the Prime Minister of North Macedonia, Zoran Zaev, Albania's Deputy Minister of Energy and Infrastructure, Ilir Bejta, as well as representatives of the EU and EBRD.

The project completes the 400kV electricity ring between Albania, North Macedonia and Greece, enhancing cross-border exchanges in electricity and contributing to the development of the regional market. A further section between Bulgaria and North Macedonia, which has also been financed by the EBRD, has already been completed. A new 400kV line between Albania and Montenegro as well as a submarine cable between Italy and Montenegro are also completed and operational. The new transmission line will provide improved and affordable energy supply to residents and businesses in North Macedonia by normalising voltage levels, stabilising load flow and frequency fluctuations, and decreasing technical losses in the overall transmission system. The WBIF project is expected to be completed in 2023, and includes the construction of the 400kV transmission line Bitola (North Macedonia) - Elbasan (Albania) in a length of 97,4 km, construction of a 400/110kV transformer station in Ohrid and construction of a 400kV transmission line field in the transformer station Bitola 2. 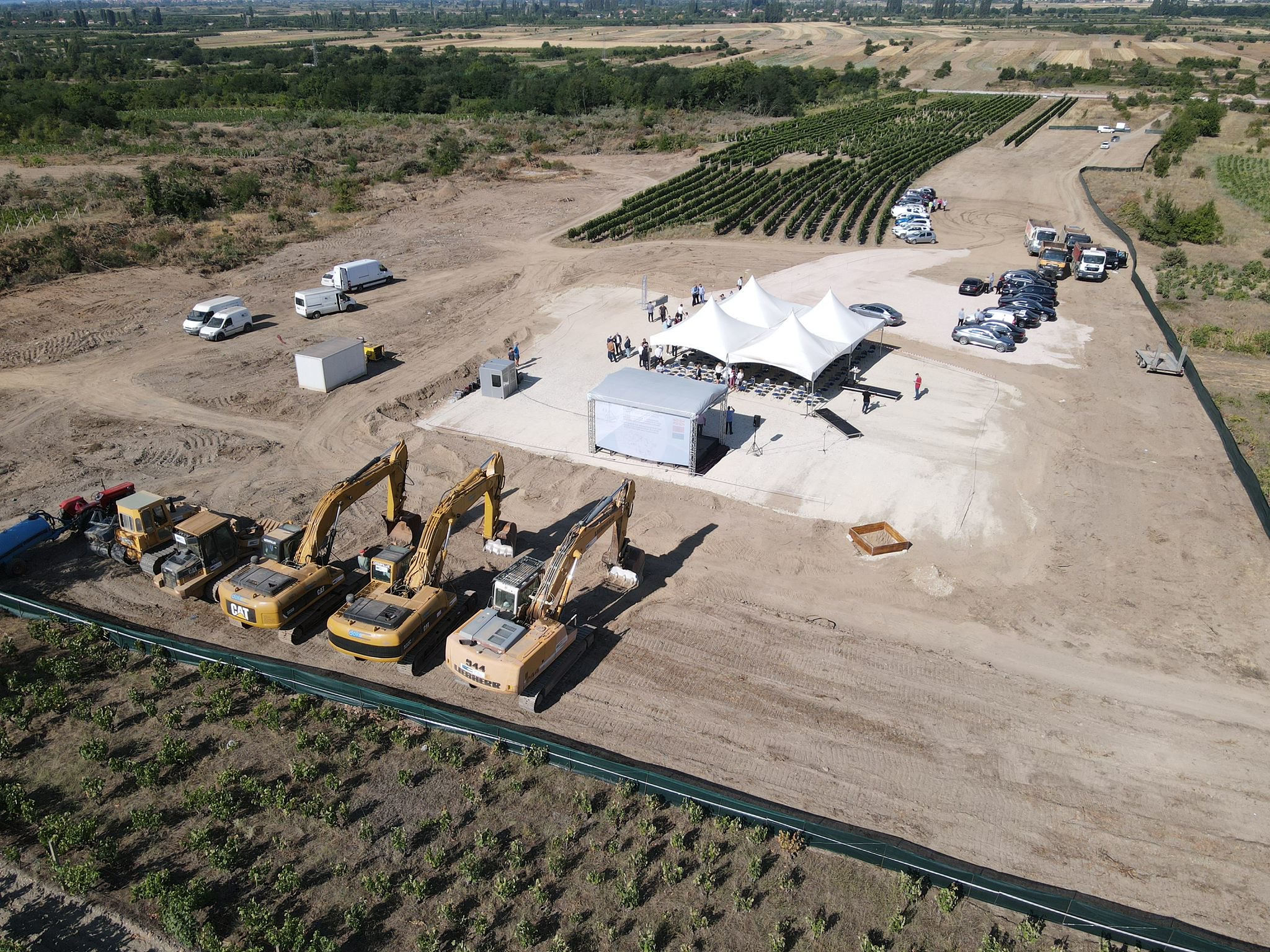 The EBRD provided a €37 million to the Macedonian Transmission System Operator AD (AD MEPSO) to support the construction of the interconnector and for the introduction of smart grid components, which improve energy forecasting and facilitate the integration of renewables into the power system. The EU co-financed the investment with a €12 million grant under the Western Balkans Investment Framework. In addition, Luxembourg extended funds for technical assistance to AD MEPSO. 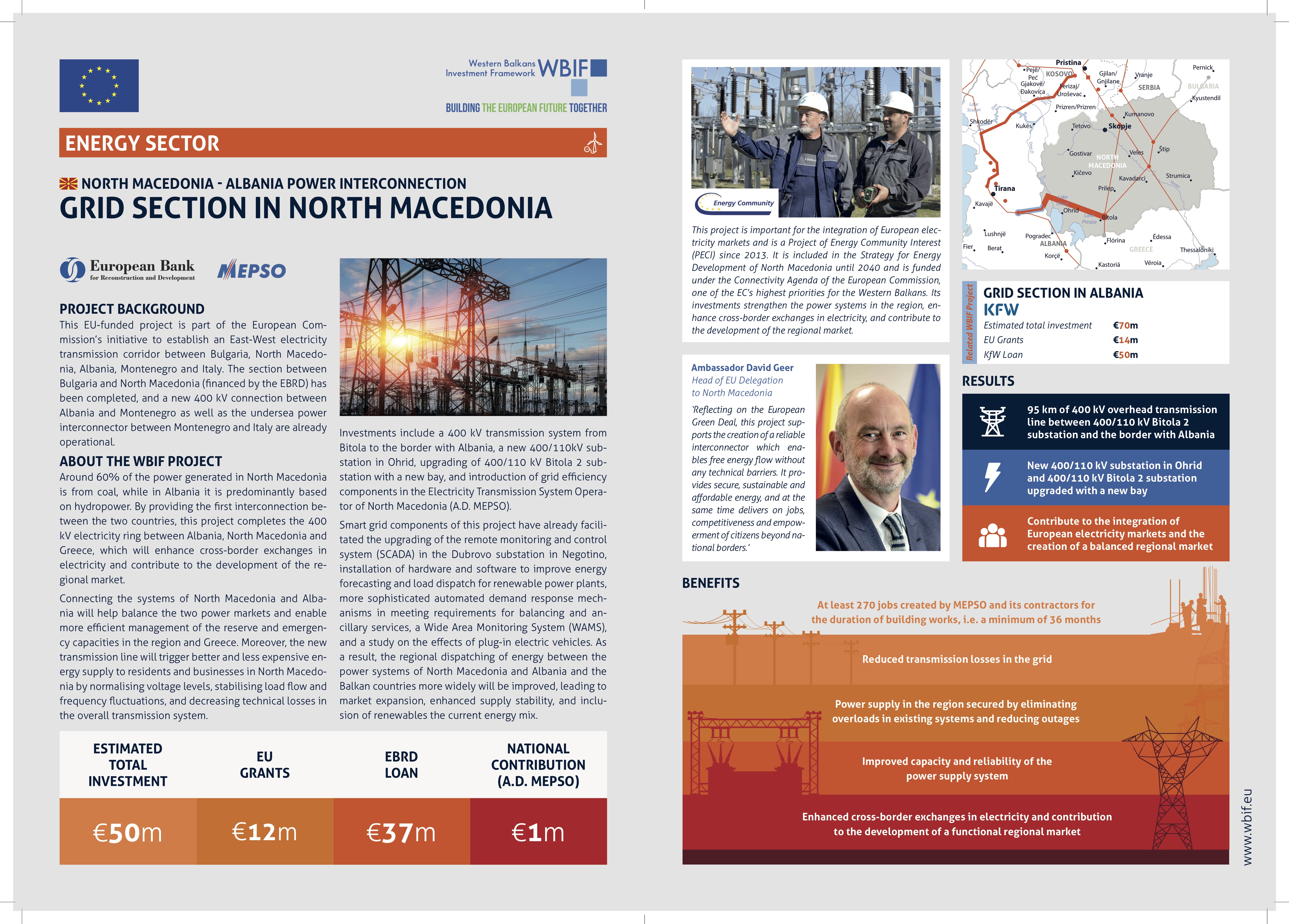 On the Albanian side, the investments comprise a 400 kV transmission system that will connect Fier to Elbasan and from there to the border with North Macedonia. In addition, a new substation (Elbasan 3) will be built while the substation in Fier will be upgraded to 400 kV level. These investments are supported by a €14.3 million EU grant, and a €50 million loan provided by the KfW Development Bank on behalf of the German Federal Government.

This project is important for the integration of European electricity markets and is a Project of Energy Community Interest (PECI) since 2013. It is included in the Strategy for Energy Development of North Macedonia until 2040 and is funded under the EU’s Connectivity Agenda.

Zoran Zaev, Prime Minister of North Macedonia, said: “This capital investment is of great importance for building a more developed and more stable energy infrastructure in the country and in the region. With the laying of the cornerstone of this capital building begins the realization of the 400kV transmission line Bitola (North Macedonia) - Elbasan (Albania), as part of Corridor 8. With this investment, the power corridor east - west will be put into full operation which means transit of electricity from Bulgaria, through North Macedonia and Albania to Italy.”

Julian Vassalo, Deputy Head of the EU Delegation, said: “This project, supported by the EU with a grant of €12 million, is allowing the two  countries to create a sustainable regional energy market, move towards the decarbonisation targets of the Green Agenda and replace ageing infrastructure that is prone to technical losses. Ultimately this will result in more reliable and less expensive supply of energy for residents and companies in the region."

Andi Aranitasi, EBRD Head of North Macedonia, said: “Supporting crucial regional cross-border infrastructure is key to creating larger integrated energy markets and increasing energy security in the region. The construction of this new line will help scale up renewable energy capacity in North Macedonia, allowing the country to achieve a faster decarbonisation of its electricity sector and also improve the balancing of the electricity systems by connecting the Macedonian electricity market, which is dominated by thermal power, to the Albanian electricity market, where hydropower prevails”.

Blagoj Bochvarski, Minister of Transport and Communications of North Macedonia, said: "In this whole process AD MEPSO is crucial and with this project the power transmission system of North Macedonia will be connected with other neighboring countries and will be in a position and opportunity to help each other whenever needed. We are investing, modernizing and connecting with the region, the Balkans and the whole of Europe."

Kushtrim Ramadani, AD MEPSO Director, said: ”Investments and modernisation of the transmission network are a priority. Today we are laying the cornerstone of one of the most significant projects in the history of North Macedonia, but also in the wider region, which I would call Via Ignacia Energia. Despite the difficult conditions caused by the pandemic, we managed to start this big project and we are firmly convinced that we will finish it on time.”

Ilir Bejta, Albania's Deputy Minister of Energy and Infrastructure, said: “Such capital regional project open up opportunities for new investments, and I would like to use this opportunity to express my gratitude to all the partners for co-operation and support.” 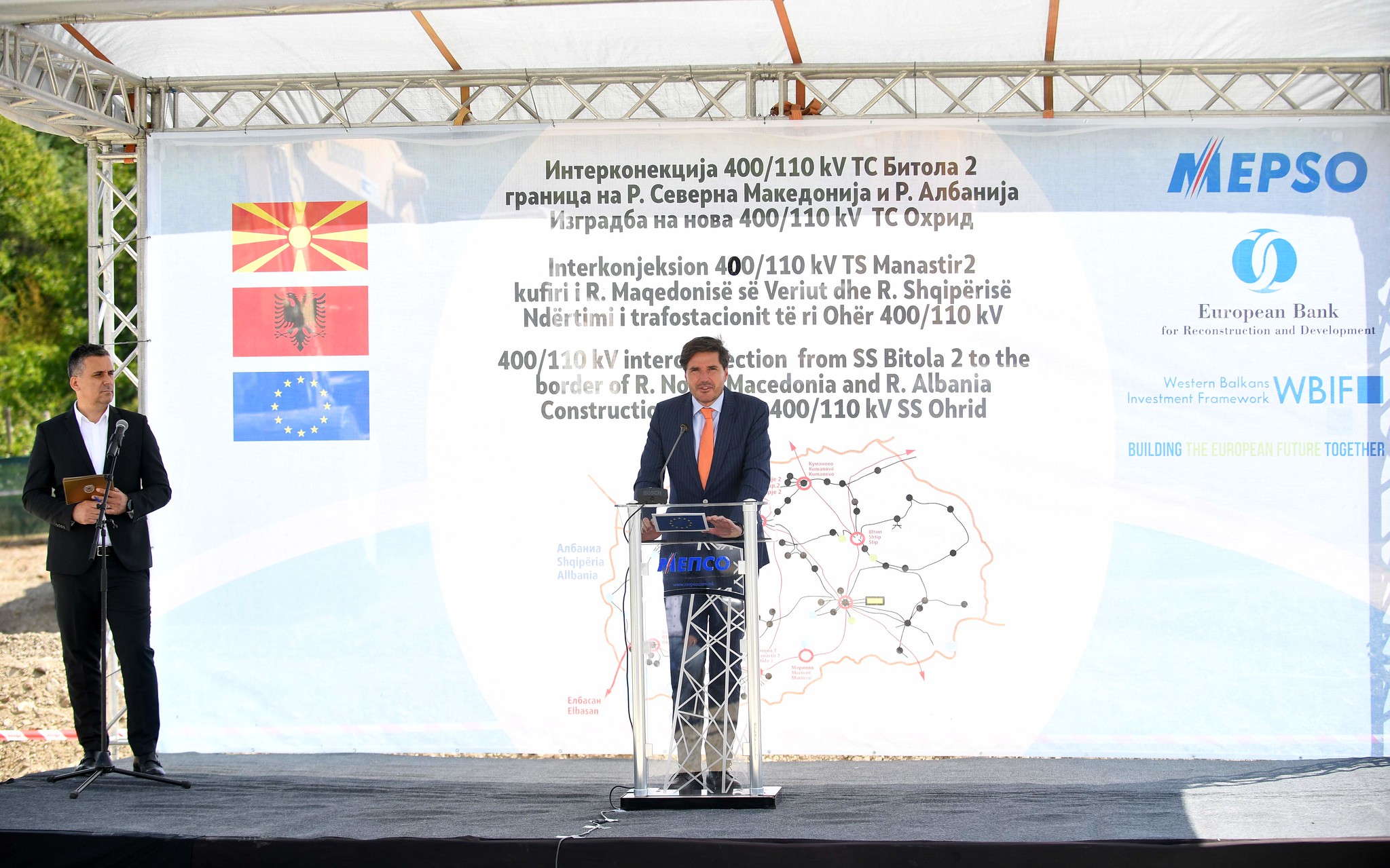 More about the Energy Community