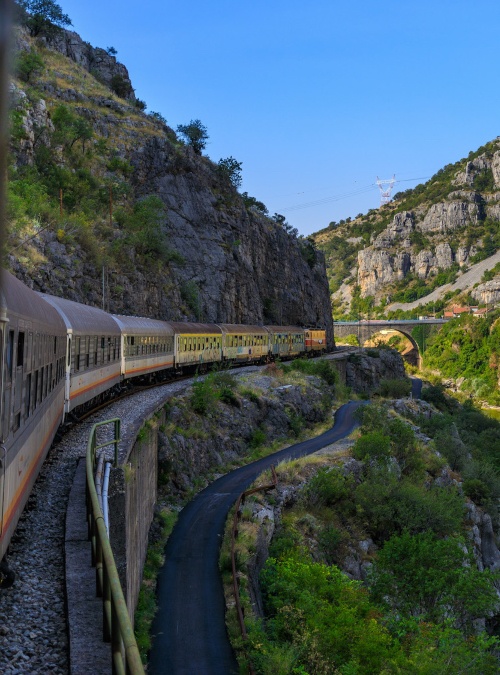 The virtual kick-off meeting of the Technical Assistance project for the ‘Modernisation of Rail Route 4, Golubovci – Bar’ took place end April 2021. The objective of the EU-funded project is the rehabilitation and upgrade of the 39 km long railway section between Golubovci and Bar stations, which is part of the most important railway line of Montenegro, connecting the port of Bar with Podgorica and the border with Serbia.

Representatives from the Ministry of Capital Investments, the Ministry of Finance and Social Welfare, the EU Delegation in Montenegro and KfW Development Bank on behalf of the German Federal Government attended the kick-off meeting, together with staff from the beneficiary, the Montenegro Railways (ŽICG).

The objectives of the project, the team of experts, the different phases in the implementation and the expected results from modernizing the Golubovci-Bar railway line were presented.

The main benefits from the upgraded railway line will be:

- Increased capacity of the railway line for the routing of more trains;


During this project, all the environmental and social impacts of the modernization will be thoroughly addressed and a detailed Environment and Social Impact Assessment (ESIA) study will be prepared in parallel with the detailed design of the railway line. The ESIA will be exhaustively discussed with the local communities and all the relevant stakeholders and their comments will be taken into account before the ESIA and the design of the new line are finalised.

Considering the strategic location of the port of Bar and the increased capacity of the modernized railway line, a sharp increase in the freight loads transported from Bar via railroad is expected, provided that the planned construction of intermodal facilities in Bar and other railway stations is also completed. Overall, with the improvement of the railway network between Bar and the Serbian border, freight and passenger flows are expected to shift from road to rail transport, increasing the sustainability and reducing the carbon footprint of the Montenegro transport sector.

The EU has provided a grant of €3 million through the WBIF, in addition to five more grants having already been provided for the reconstruction of railway bridges, the rehabilitation of tunnels, landslides rehabilitation solutions and the installation of signalling and interlocking devices in the railways of Montenegro.

Željko Uljarević, Head of the KfW Office in Podgorica, said that he is looking forward to a good teamwork and successful finalization of the project in two years.

Malte Engelien, EU Delegation Task Manager for Transport, expressed his hope for good cooperation for the project’s timely implementation and emphasized the need for improvement of level crossings to increase the safety of road and rail traffic.

Marko Dragaš, Head of the group for infrastructure projects in the European Integration Office, offered his support to the project team and said that he is very happy that this project is starting, having in mind its importance.

The extension of the Orient/East-Med Rail Corridor into the Western Balkans along Route 4 is approximately 580 km long and runs from Vršac (Serbia – Romania border) to Belgrade (Serbia) and then to Podgorica and Bar (Montenegro). Bar – Vrbnica (the latter at the Montenegro – Serbia border) is the most important section of the Montenegrin rail network, carrying about 20% of all passengers and about 60% of the cargo. Rail as a whole is an important part of the Montenegrin economy, accounting for almost 60% of all freight and 10% of passenger travel.

The EU has provided €70 million in grants for the rehabilitation of the Bar-Vrbnica R4 Rail interconnection, complementing €140 million of loans from the European Investment Bank and the KfW Development Bank on behalf of the German Federal Government. The project has been identified as a Flagship in the EU's Economic and Investment Plan for the Western Balkans 2021-2027.