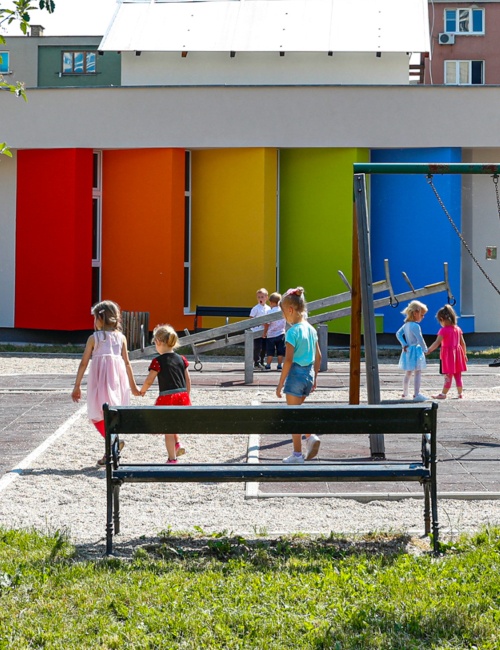 As part of the “Energy efficiency in public buildings in Sarajevo Canton” project, a ceremony was held on 3 June to mark the completion of works to improve the energy efficiency of the preschool institution Kindergarten “Labudovi” in Sarajevo. The energy efficiency improvement works included thermal insulation of the facade, partial replacement of worn-out openings, installation of thermostatic valves on existing radiators, installation of calorimeters and automatic heating control with circulating pump, replacement of inefficient lighting with new LED bulbs, and preparatory and accompanying works on the building renovation.

The unveiling of the plaque with the names of financiers and friends of the project was attended by the Prime Minister of Sarajevo Canton Edin Forto, Minister of Communal Economy, Infrastructure, Physical Planning, Construction and Environmental Protection Enver Hadžiahmetović, Minister of Education Naida Hota-Muminović, Head of Operations, Section for Economic Development, Natural Resources and Infrastructure at the EU Delegation to BiH Gilles Rebattet, Head of the European Bank for Reconstruction and Development (EBRD) Office in BiH Manuela Naessl and Acting Director of the Public Institution “Djeca Sarajeva”, Alma Trnka.

Gilles Rebattet, Head of Operations, Section for Economic Development, Natural Resources and Infrastructure at the EU Delegation to BiH, pointed out that air pollution is one of the key problems with significant economic consequences, shortening life expectancy and increasing medical treatment costs. “The EU is pleased to support the work of the Sarajevo Canton Government to reduce air pollution through numerous projects. For this particular project, which will lead to cleaner heating, better insulation and overall improvement of conditions in schools, kindergartens, student dormitories and outpatient clinics in Sarajevo Canton, the EU provides 2 million euros in grants. This project is an important step toward a collective effort to improve the environment and air quality in Sarajevo Canton,” Rebattet said.

The Head of the European Bank for Reconstruction and Development (EBRD) office in BiH, Manuela Naessl, said: “The EBRD and donors support Sarajevo to become a greener and more sustainable city by investing in urban transport, water supply network, energy efficiency and district heating. We are proud of our joint work so far and I am looking forward to new projects that will increase the quality of life in this city and make the communal services of public companies better and more efficient for the citizens.”

“We are renovating 40 buildings, kindergartens, schools, faculties, student dormitories and local outpatient health centres. At the same time, we are saving energy and we will repay the loan from those savings. In addition, BAM 4 million are grants. I promised these renovations when I launched the project in 2019, and I am happy that I am fulfilling that promise now, with the full engagement of Minister Hadžiahmetović,” Prime Minister Forto said.

Minister Hadžiahmetović pointed out that, with the support of friends from the European Union and the EBRD, the Government of Sarajevo Canton recognised the importance of implementing projects in the field of energy efficiency and improving the air quality in the Canton. “We are here today to celebrate the completion of works on the first of 40 public buildings in the Canton, with children’s smiles and laughter in the background. The benefits of this project are multiple – our children will have better conditions, and we will reduce energy costs and emissions of harmful particles into the air,” Minister Hadžiahmetović said.

The REEP/REEP Plus is identified in the European Commission's Economic and Investment Plan for the Western Balkans as one of the Flagship projects "Renovation Wave" under the Investment window "Clean Energy". These projects contribute significantly to the reduction of greenhouse gas emissions, and improve the living standards and health of citizens. The activities under REEP/REEP Plus are in line with the EU Regulation and Green Agenda Targets for the Western Balkans, following the five pillars of the European Green Deal.