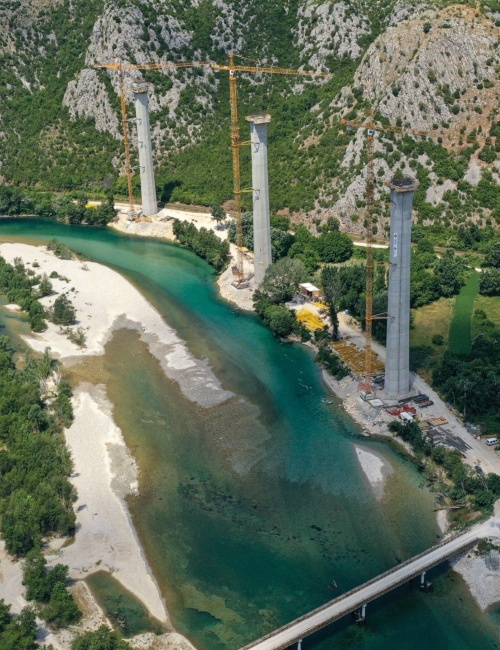 The European Investment Bank (EIB) and the Ministry of Finance of Bosnia and Herzegovina signed an agreement on Thursday for a €5 million EU grant for the supervision of construction works for the Počitelj-Zvirovići subsection of Corridor Vc. Once completed in 2022, it will provide approximately 21 km of continuous motorway between Počitelj and Bijača on the southern border of Bosnia and Herzegovina with the European Union in Croatia.

The total investment in the 11.1 km-long Počitelj-Zvirovići subsection amounts to €111.2 million, including €5 million in grants from the European Union. The project will lead to the construction of a bridge, a tunnel, three viaducts, an interchange and a toll in Počitelj, the inter-regional interchange of local roads and connection to other motorways, an overpass and three underpasses. The most significant structure already under construction is the colossal Počitelj Bridge stretching 980 metres across the Neretva River, with a maximum height of 97 metres.

Corridor Vc is a major transit road between the countries of the region that runs through Bosnia and Herzegovina, and was thus identified as “Flagship 2, Connecting North to South” in the European Commission’s Economic and Investment Plan for the Western Balkans 2021-2027. Following the TEN-T Mediterranean Corridor extension to the Western Balkans, Corridor Vc starts in Budapest, runs via northern Croatia (Osijek), crosses 325 kilometres through Bosnia and Herzegovina via Doboj, Zenica, Sarajevo and Mostar, and ends in the Croatian port of Ploče. 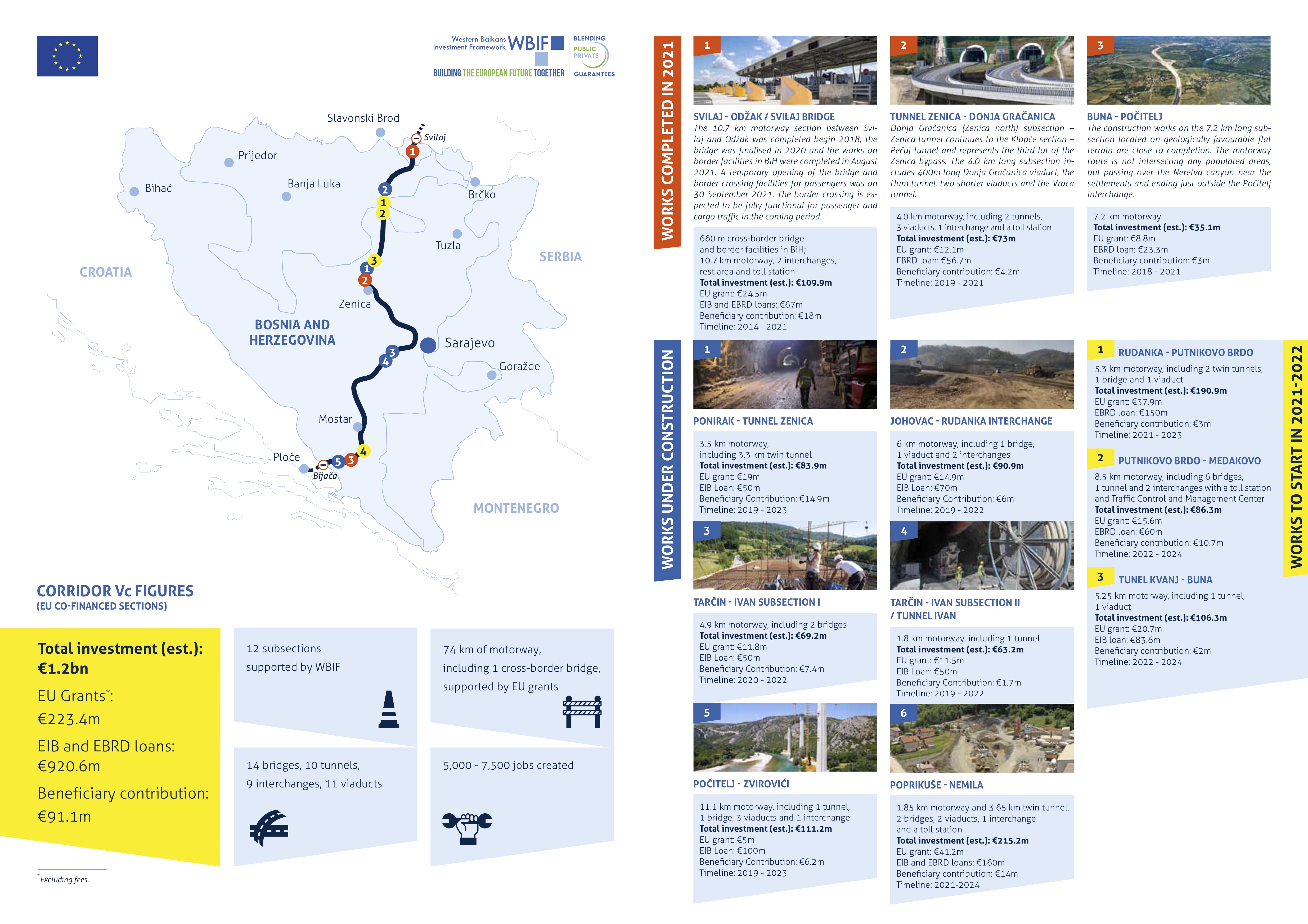 
Ambassador Johann Sattler, Head of the EU Delegation and EU Special Representative in Bosnia and Herzegovina: “This new €5 million grant signed today represents another major step towards the completion of the vital Corridor Vc. Better links within the country will deepen economic and cross-border integration, as well as strengthen the development of local transnational Euroregions, creating a virtuous circle of economic growth and deeper European integration. The European Union has so far allocated more than €225 million for the construction of Corridor Vc. Our support will continue alongside the Economic and Investment Plan, which sets up a substantial investment package supporting connectivity in the region.”

Lilyana Pavlova, EIB Vice-President, responsible for the Western Balkans: “The development of Corridor Vc in Bosnia and Herzegovina is very important for improving the standard of living, alleviating poverty and accelerating the recovery from the COVID-19 pandemic. More than 95% of goods and passenger transport in Bosnia and Herzegovina is by road, making it essential for local, regional and international trade and economic exchange. The EIB continues to support the construction of this major regional transit route on Corridor Vc and we are glad that the works are progressing in spite of the pandemic, for the benefit of people across Bosnia and Herzegovina and for better connectivity in the Western Balkans region.”

Vjekoslav Bevanda, Minister of Finance and Treasury of Bosnia and Herzegovina: “The frequency of traffic along this section will definitely be high, thus bringing importance to the place of BiH on road maps. We will not be avoided by passengers from the European Union, they will travel through BiH and hopefully stay here. This is a way for us to develop our tourism, economy and general living standard”. 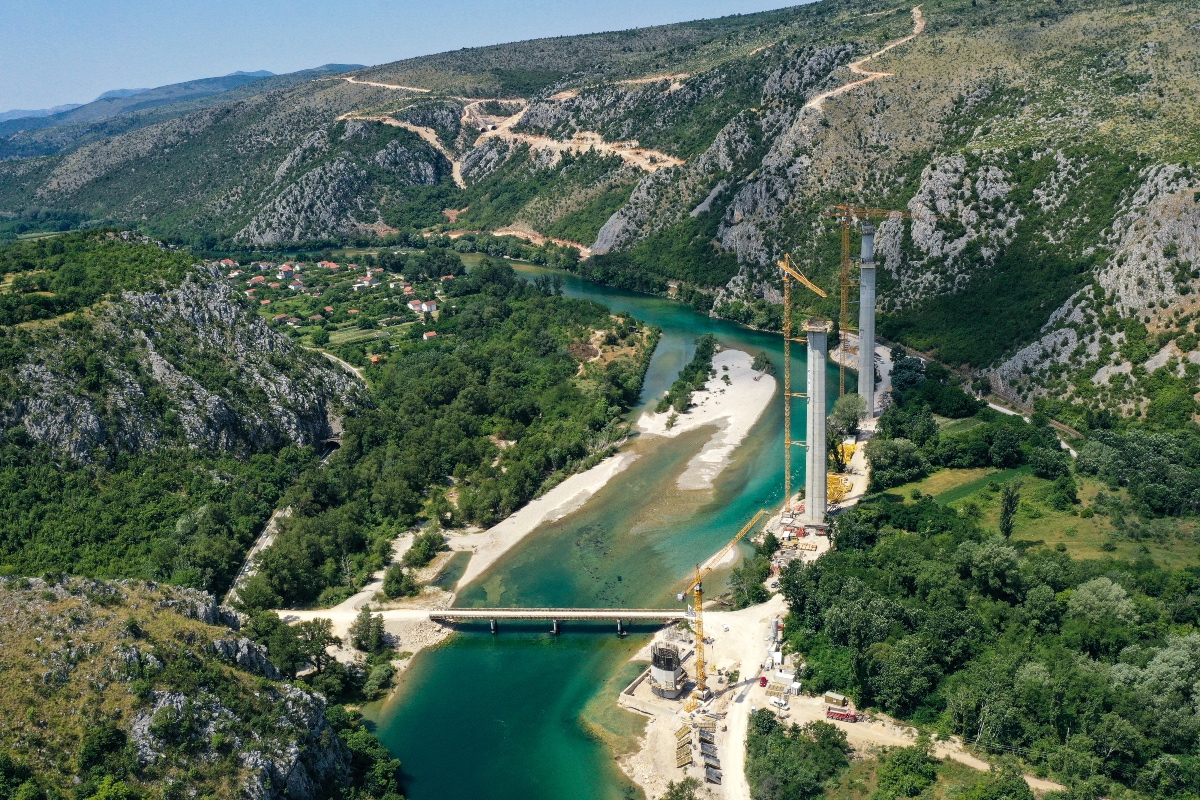 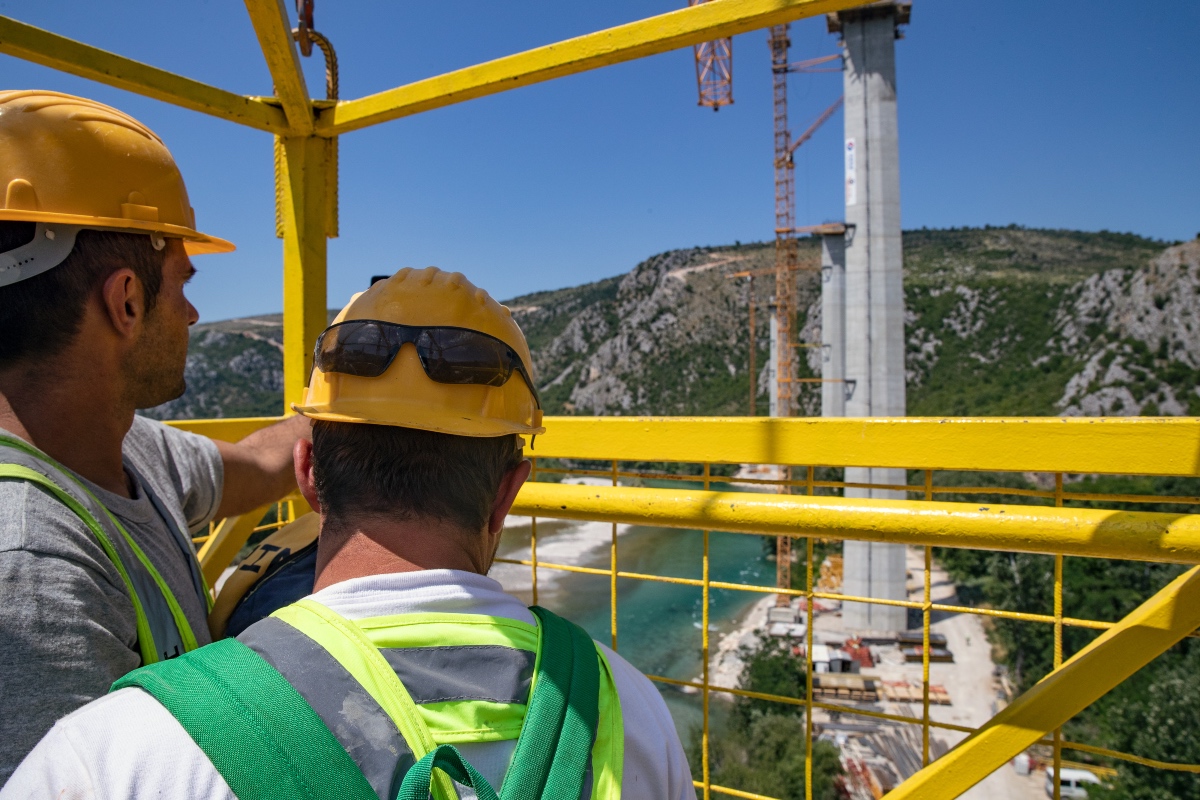 More about the Corridor Vc

More about the WBIF Activities in Bosnia and Herzegovina