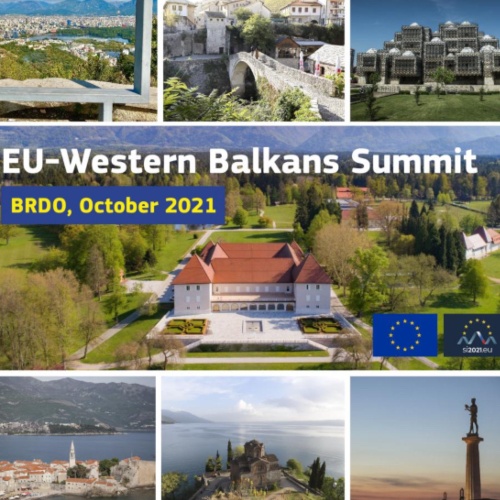 Leaders from the EU member states met the six Western Balkan partners at the Brdo pri Kranju summit on 6 October 2021. Hosted by the Slovenian presidency, the EU leaders agreed on the Brdo declaration, with which the Western Balkan partners – Albania, Bosnia and Herzegovina, Kosovo, Montenegro, North Macedonia, and Serbia, have aligned themselves.

The Brdo declaration of the EU-Western Balkans summit reaffirms the EU’s unequivocal support for the European perspective of the Western Balkans. It sets out initiatives to support connectivity and the green and digital transitions in the region, and commitments in the area of political and security cooperation.

The declaration also refers to a range of concrete deliverables benefiting the Western Balkans, including:


The EU reconfirmed its commitment to the enlargement process and relevant decisions taken, based upon credible reforms by partners, fair and rigorous conditionality and the principle of own merits. EU leaders also recalled the importance for the EU of being able to maintain and deepen its own development, ensuring its capacity to integrate new members.

The Western Balkans partners reiterated their dedication to European values and principles and to carrying out necessary reforms in the interest of their people. The EU is the Western Balkans’ main political, economic and trade partner. Through the EIP, the EU is now providing unprecedented financial support mobilising some €30 billion for the region over the next seven years.

To reflect the importance of the close relationship between the EU and the Western Balkans, the leaders decided to regularly hold EU-Western Balkans summits, with the next one planned for 2022.