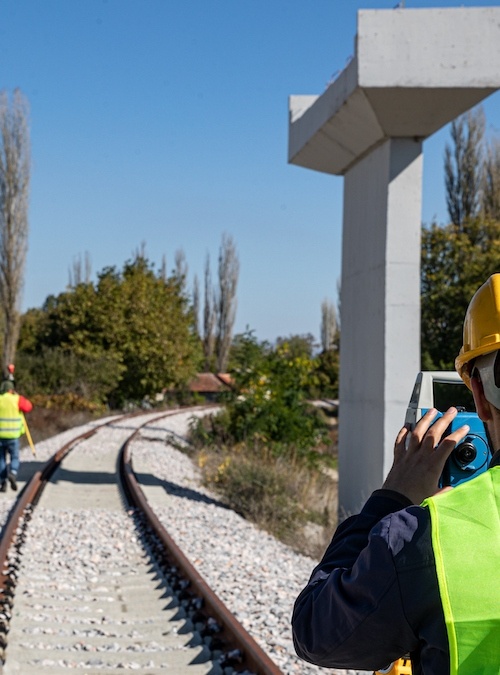 The remaining part of the long-awaited railway connection between North Macedonia and Bulgaria, which has had several attempts over the past three decades, has finally started to be built with the EU support, as part of the Pan-European Corridor VIII, connecting to the Orient/East-Med Corridor on Trans-European Transport Network (TEN-T).

The project was identified as a Flagship project within the Economic and Investment Plan for the Western Balkans.

The modern railway will connect the two countries, also creates a regional linking of the Adriatic Sea ports in Albania with the Black Sea ports in Bulgaria, opens opportunities for the economy, the business community, opens new European routes that are of exceptional importance for the economy and in general for the cooperation of the region.

It will ease the travel of the citizens of both countries, as there is a lack of direct air lines, at the same time providing more ecological transport.

Attending the ceremony to mark the start of construction works on a 34 km section from Beljakovce to Kriva Palanka and the finalisation of a 31 km section from Kumanovo to Beljakovce, the Prime Minister of North Macedonia Dimitar Kovacevski emphasised: "With dedicated cooperation, we are building our common future, providing opportunities for the economy, the business community, investing in a functional, modern, railway connection of the entire region. This investment opens up new European routes for North Macedonia for railway transport establishes a regional connection with the ports of Burgas and Varna in Bulgaria and Durrës in Albania, which is of exceptional importance for our economy and in general for the cooperation of the region."

His counterpart, the Prime Minister of Bulgaria Galab Donev said: "With a great pleasure I have accepted the invitation of Prime Minister Kovacevski to attend the start of works on the route from the eastern part of Corridor 8, for the railway which is undoubtedly as important for Bulgaria as it is for the North Macedonia as well as for Albania. It will undoubtedly contribute to the development of entire region. This project, the railway connection, was the desire of many generations on both sides of the border.”

“Improving transport infrastructure and especially railways, as a safer and greener mode of transport, will not only improve regional connectivity and open new economic and trade opportunities, but also plays a key role in addressing the urgent issue of climate change”, said Andi Aranitasi, EBRD Head of North Macedonia. 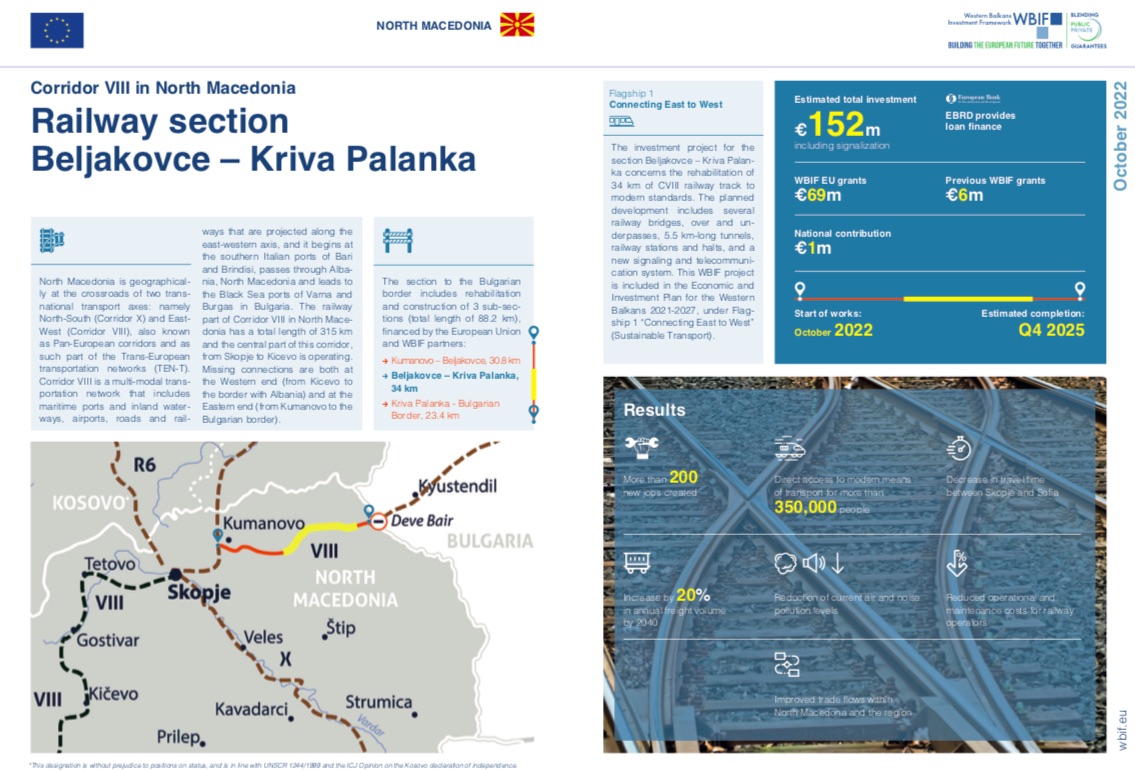 
Ambassador David Geer, Head of the EU Delegation to North Macedonia, said: “The start of construction works on the eastern sections of Railway Corridor VIII is a huge step in the expansion and modernisation of the railway network of North Macedonia. The EU supports this truly strategic initiative, one that will help promote regional trade, reduce travel times, and drive sustainable economic growth that will greatly benefit local citizens and the region's businesses. The project, which is being implemented thanks to the support of Team Europe, will not just improve national connections, but enhance connectivity across the region and with the EU.”

“This is a clear example that we work best when we work together. With more than €688 million allocated to Corridor VIII railway projects, the EUs Economic and Investment Plan is proving to be a catalyst for development across the region, enhancing cross-border cooperation, facilitating regional trade, and bringing great benefits for local citizens and businesses, as well as the environment”, added Ambassador Geer.

The railway section was financially supported with €69 million in EU investment grant. In addition, bilateral donors to the Western Balkans Investment Framework (WBIF) have extended €6 million in grants for technical assistance for project preparation and supervision.

European Corridor VIII is intended to be an east-west route connecting the Albanian Adriatic port of Durres to the Bulgarian Black Sea port of Varna via North Macedonia. Other places along the route are Elbason in Albania, Skopje in North Macedonia, Pernik in western Bulgaria, Plovdiv in southern Bulgaria and Burgas on Bulgaria’s Black Sea coast.

More about the project in the Rail CVIII Factsheet