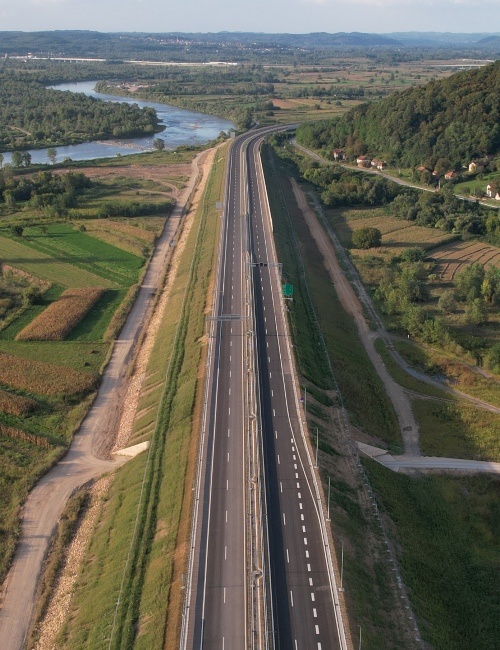 The first motorway section along Corridor Vc in the Republika Srpska (RS) to be completed, running from Johovac to Rudanka, was opened on 30 August at a ceremony attended by the Serb Member of the BiH Presidency, Milorad Dodik, the RS President Željka Cvijanović as well as representatives of the RS government, RS Autoputevi, EBRD and the EU Office in Bosna and Herzegovina.

The 6.1 km section was completed thanks to an EU grant of €15 million, which facilitated further financing in the form of favourable loans worth almost €70 million from the European Bank for Reconstruction and Development.

Governments and taxpayers continue to benefit from the highly favourable financial conditions offered for EU-supported infrastructure projects in Bosnia and Herzegovina. Moreover, by supporting connectivity in the Western Balkans as well as between the Western Balkans and the EU Single Market, which is the world’s largest economic area, EU-supported motorway projects along Corridor Vc deliver further economic benefits, as well as faster and safer journeys.

The Johovac to Rudanka section ensures a direct connection to the Banja Luka – Doboj motorway and the existing M17 main road in Bosnia and Herzegovina. It complements two other sections – Vukosavlje – Johovac and Rudanka – Putnikovo brdo, being built by RS Autoputevi. Passenger and freight travel speed along the section will increase from 60 km/h to 100 and 120 km/h.

The success represented by the completion of the Johovac to Rudanka section takes place against a backdrop of political instability in Bosnia and Herzegovina, which creates risks for future EU investment in infrastructure. EU financing for two infrastructure projects in the Republika Srpska along Corridor Vc remains suspended as a result of the political crisis.

Stefano Ellero, Head of Cooperation of the Delegation of the European Union in Bosnia and Herzegovina said: “Johovac-Rudanka is the first completed Corridor Vc section in Republika Srpska. For its construction, the EU has provided 15 million euros in grants, which in turn facilitated 70 million euros in loans from the European Bank for Reconstruction and Development. This section is part of a much larger story, namely the connection of BiH to the wider region and the European Union. These faster and safer connections to regional and EU networks will provide concrete benefits for people in Bosnia and Herzegovina”.

The EU and its Member States continue to be Bosnia and Herzegovina’s largest and most loyal source of financing, as well as BiH’s biggest trading partner and investor. However, the country’s authorities are not using the full potential of EU funding mechanisms, with the risk of losing out on hundreds of millions of euros in investments in transport and energy infrastructure. The EU Office in BiH urges politicians not to miss the opportunities offered by the European Union, which present clear and irreplaceable benefits for BiH’s citizens.

Corridor Vc is a major transit road between the countries of the region that runs through Bosnia and Herzegovina, and was thus identified as “Flagship 2 - Connecting North to South” in the European Commission’s Economic and Investment Plan for the Western Balkans 2021-2027. Following the TEN-T Mediterranean Corridor extension to the Western Balkans, Corridor Vc starts in Budapest, runs via northern Croatia (Osijek), crosses 325 kilometres through Bosnia and Herzegovina via Doboj, Zenica, Sarajevo and Mostar, and ends in the Croatian port of Ploče.

More about the Corridor Vc

More about the WBIF in Bosnia and Herzegovina

More about the Economic and Investment Plan