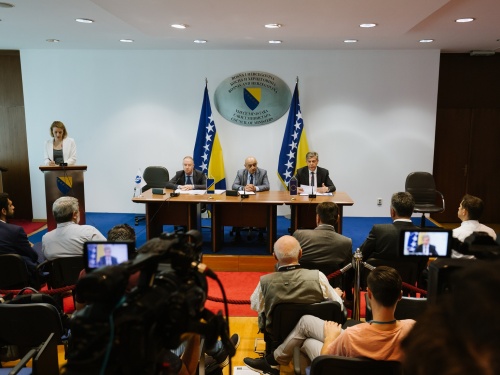 The EU grant complements an up to €70 million loan from the EBRD and supports the construction of a 6.1 km motorway section and two interchanges between Johovac and Rudanka on Corridor Vc in Bosnia and Herzegovina. The new developments lie on the Mediterranean Corridor, which links the Iberian Peninsula with the Hungarian – Ukrainian border. Its extension into the Western Balkans, mostly associated with what is regionally known as Corridor Vc, connects Central Europe, specifically Hungary and eastern Croatia, to Bosnia and Herzegovina and the Adriatic Sea.

The project is now at the construction stage and, once completed, will ensure a direct connection to Bana Luka – Doboj motorway and to the existing M17 main road in Bosnia and Herzegovina. It complements three other motorway sections which are to be built by the Public Company Republika Srpska Motorways along the Mediterranean Corridor in Bosnia and Herzegovina, as follows:

More details on the event may be found here and here. Additional information on the project as well as on the WBIF operations in Bosnia and Herzegovina can be found in the project summary and on our website.