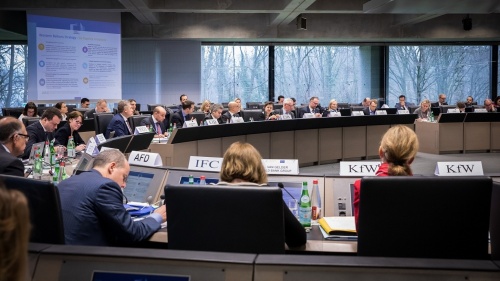 DG NEAR’s Deputy Director-General Katarína Mathernová presented the challenges for the Western Balkans and the European Commission’s strategic response. The WBIF umbrella will be reinforced through closer integration of other initiatives, e.g. for private sector development and energy efficiency. A stakeholder working group will be established to develop the new structure that will be presented for approval at the next WBIF SC meeting in Berlin (25-26 June 2019).

The Commission's new approach to the Economic Reform Programs’ assessment, the next Multiannual Financial Framework, and the Western Balkans Regional Economic Area were also discussed. The Commission’s new Guarantee Instrument will be operationalised early in 2019.

Parallel to this new approach and new instruments, the EU branding will be reinforced and the "EU for You" concept will be adapted for the WBIF and used for EU visibility. The economic outlook in the region was presented by the World Bank Group and progress on the Regional Economic Area by the RCC.

The Bilateral Donors (BD) Community presented the results of the study "Investments in the Western Balkans: New Directions and Financial Constraints in Infrastructure Investment" by the Vienna Institute for International Economic Studies. The traditional pledging saw a total of €9.6 million contributions to the EWBJF. Out of these BD contributions, two environment investment projects approved by the 19th WBIF SC are co-financed. Germany was presented as the new WBIF SC Co-chair for 2019. Finally, in the IFI session, AFD was welcomed as a new participating organisation in the WBIF, and the WBIF Secretariat was mandated to further the discussion with the WBG becoming a full member of the Framework.

The Steering Committee approved 11 technical assistance grant applications for €16.5 million and 11 investment grants for a total of €190.8 million, out of which €183.1 million are for connectivity projects and €7.7 for environment projects.