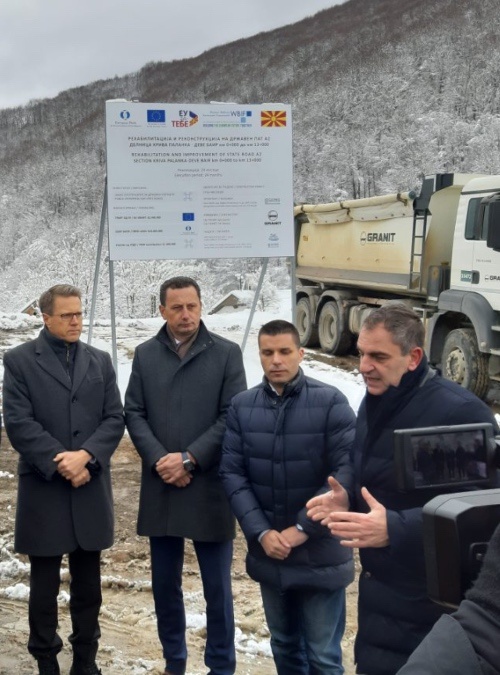 On Thursday 6 February the works commenced on the 2018 Connectivity project, concerning the rehabilitation and expansion of the road section on the Orient/East-Med Core Network (Corridor VIII) in North Macedonia, from the town of Kriva Palanka to the Deve Bair border crossing point with Bulgaria.

The EU has provided €2.5 million in grants through the Western Balkans Investment Framework (WBIF) for this €13.7 million road reconstruction project. This complements the €10 million loan financing provided by the European Bank for Reconstruction and Development (EBRD) as well as the €1 million contribution provided by North Macedonia.

The works involve both rehabilitation and reconstruction, expanding the 13.7 km-long single two-lane carriageway road to add a third lane, including on three existing bridges. This will allow for more efficient and safer driving for the people living along the Kriva Palanka – Deve Bair route. Additionally, the project is expected to lead to a reduction in accident rates and vehicle operating costs for more than 2,000 people working and/or living along the route as well as for almost 3,000 people who daily cross the border.

The investment will create more than 140 jobs during the construction, operation and maintenance periods, in addition to improving trade flows with countries in the region and therefore having a positive impact on the broader economy of North Macedonia.

Ambassador Samuel Zbogar: ‘This project is of particular importance for the economic development of the municipalities on both sides of the border between North Macedonia and Bulgaria, as well as for the region itself. The Berlin Process has from its inception been crucial for the region’s connectivity, and the EU will fully support this initiative in the future to build stronger regional connections.’

Goran Sugareski, Minister of Transport and Communications: ‘The Palanka – Deve Bair road is one of the most intensive freight traffic routes to and from neighboring Bulgaria. This is why we are also working on the construction of the rail section on Corridor VIII from Beljakovce to the border with Bulgaria.’

Andi Aranitasi, Director of EBRD Skopje: “We remain a dedicated partner of the Government of North Macedonia in all future projects, especially in support of capital infrastructure initiatives.”

More information about the project here.