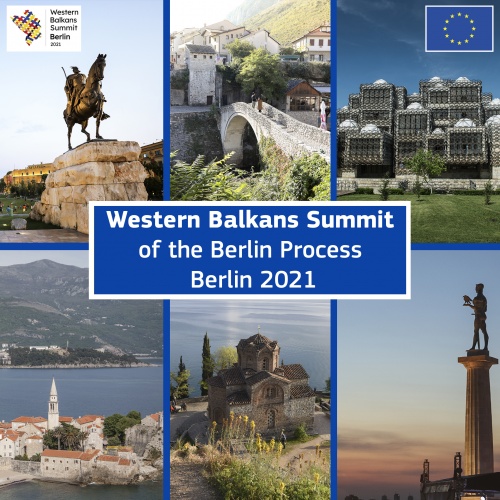 On Monday, President of the Commission, Ursula von der Leyen, and Commissioner for Neighbourhood and Enlargement, Olivér Várhelyi, participated in the Western Balkans Summit in the context of the so-called 'Berlin Process'. The summit brought together for the eight time Heads of State or Government from the Western Balkans and their counterparts from nine EU Member States, high-level EU representatives and the United Kingdom, to advance on their regional cooperation and European integration agenda. The virtual meeting was hosted by the German Chancellor Angela Merkel.

During the Summit, the Commission reconfirmed its commitment to cooperation with and support for the region in its post-pandemic recovery through the Economic and Investment Plan for the Western Balkans, focusing on green and digital transition investments, smart mobility links, sustainable energy, digital infrastructure, and business sector development and human capital, including youth. The Commission also called for further progress in the region's economic integration to reap the full benefits of the planned investments.


President of the Commission, Ursula von der Leyen, in her opening address, said: “Our first priority is to accelerate the enlargement agenda across the region and support our Western Balkan partners in their work to deliver on the necessary reforms to advance on their European path. But our engagement with the Western Balkans goes beyond that, and the Berlin Process has served as an incubator for many initiatives that have now become an integral part of the EU's policy vis-à-vis the region. Together we have set the course for a more sustainable, more digital and more resilient Europe.”

Commissioner for Neighbourhood and Enlargement, Olivér Várhelyi, emphasised: “Closing the socio-economic gap between the Western Balkans and the EU is crucial for the Enlargement process. We are bringing significant investment opportunities to the region through the Economic and Investment Plan. Now it is for the region to use them well by harnessing its full economic potential and establishing a Common Regional Market based on EU rules. Creating 'Green Lanes' on the border crossings within the entire region first, and now piloting this with an EU Member State is a perfect illustration of how this can work.”

Today's Summit focused on the progress achieved by the region in economic integration under the Common Regional Market action plan from last year's 2020 Sofia Summit, and on implementing the Economic and Investment Plan put forward by the Commission last autumn.

Following the facilitation of border crossing logistics within the region during the pandemic, through the establishment of the so-called 'Green Lanes', this initiative is now entering a new phase. Greece expressed its political willingness to endorse the extension of the 'Green Lanes' initiative to the Western Balkans and its commitment to work towards its application to the designated border-crossing points between Greece and its neighbouring Western Balkans countries – Albania and North Macedonia.

This year's Summit was also an opportunity to celebrate the full entry into force on 1 July 2021 of the Regional Roaming Agreement, which is abolishing roaming charges within the region. The next step under preparation is a glide path for the gradual abolition of roaming charges between the Western Balkans and the EU.

For the implementation of the Economic and Investment Plan for the Western Balkans, the Commission announced that it has the intention to propose an investment package of €500 million in 2021. The package will be dedicated to flagship projects under the Plan, subject to the adoption of the new framework for the Instrument for Pre-accession Assistance (IPA III) expected in the coming months.

The Berlin Summit is part of the Berlin Process, an initiative of several EU Member States, under German leadership, to engage with the six Western Balkan partners and promote regional cooperation and the European perspective of the region. It consists of annual summits and a series of ministerial meetings. In 2021, after seven years, the Summit has returned to Berlin. The Commission and the EEAS participate in the ministerial meetings and summits, as do key International Financial Institutions, and some regional and international organisations. The future of the Berlin Process will be discussed by leaders in the Berlin Summit, with concrete decisions to be taken at a later date.

Following the €3.3 billion package of financial assistance, announced in 2020 specifically to help dealing with the COVID-19 crisis and its aftermath, the Commission's main framework for supporting the region's economic recovery is the Economic and Investment Plan for the Western Balkans. The Plan foresees mobilising up to €9 billion in grant funding over the next seven years and €20 billion in loans, leveraged by the new Western Balkans Guarantee Facility.

The Economic and Investment Plan adopted by the Commission in October 2020, covers flagship projects in the areas of green and digital transition (including the Green Agenda for the Western Balkans), smart mobility, sustainable energy, support to the private sector and development of the human capital of the region to prevent further brain drain. An important crosscutting theme of the plan is developing rule of law and public administration reform to ensure a stable ground for investments and growth and social inclusion, particularly concerning the Roma population.

A crucial element of the Economic and Investment Plan and the Berlin Process, the Common Regional Market agreed by the Western Balkans Leaders in Sofia in November 2020, is an ambitious regional economic integration project, aiming to turn the region into an area of free movement of people, goods, services and capital, based on the EU example and standards. This will not only unlock the economic potential of the entire region and make it a more attractive investment destination, but will also bring it closer to the EU.

More about the WBIF and the Berlin Process