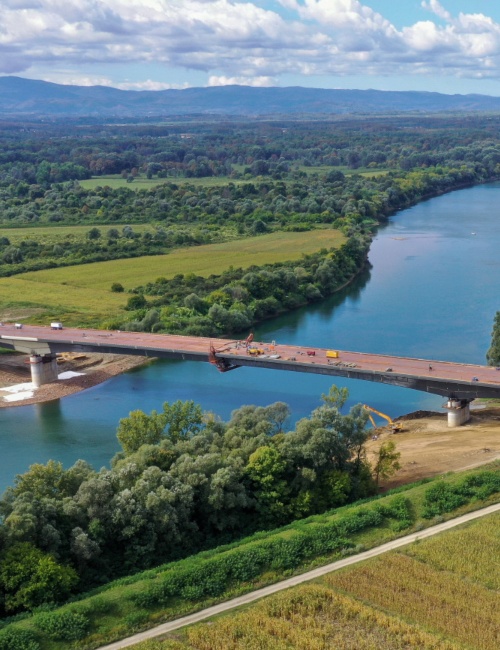 Cross-border Bridge on the River Sava at Gradiška Officially Connected

Steel construction works on the cross-border bridge at Gradiška on the Sava river, one of the most important regional infrastructure projects, connecting Bosnia and Herzegovina and Croatia, were finalised on Friday. The European Union is co-funding the building of this vital bridge with €3.2 million in grants. The bridge is one of the most important projects on the Sava River and will enable an essential transport connection between Bosnia and Herzegovina and Croatia, as well as the rest of Europe. The ceremony was attended by Stefano Ellero, Head of Cooperation of the Delegation of the European Union in Bosnia and Herzegovina, Vojin Mitrović, Minister of Communications and Transport of BiH, Tomislav Mihotić, State Secretary of the Ministry of Sea, Transport and Infrastructure of Croatia and Matej Zakonjšek, Director of the Transport Community Permanent Secretariat.

The construction of a new bridge, including the construction of a border crossing and the section of Route 2a motorway between Banja Luka and Gradiška finished in 2011, is financed with €3.2 million grant from the European Union and a loan of €65 million by the European Investment Bank (EIB) the lending arm of the EU. The new border crossing will provide a connection to the Trans-European Core Network on Corridor Vc and become a game-changer for the local economy. The 430-metre bridge over the River Sava will link the two countries and slash waiting times at the border on Route 2a, which runs 239 km from Lasva (Zenica) via Banja Luka in Bosnia and Herzegovina to Okučani in Croatia.


“The European Union has been a key partner in creation of this core road transport network connecting Bosnia and Herzegovina with Europe. Just two weeks ago, the Svilaj bridge was officially opened by the President of the European Commission and, as she stated, this symbolic act of connecting two parts means connecting people and cultures. This comes at a key time in the period of recovery from the pandemic and its impact on the economy and lives of citizens; this will boost trade, economic recovery and growth,” said Stefano Ellero.

Once fully finished and opened to transport, the Gradiška bridge will significantly reduce waiting times at the border and facilitate a faster and safer route for businesses and citizens of the country and region, leading to improved growth and new job opportunities. The project is an important step towards the integration of the Western Balkans within the European Union’s Connectivity Agenda, intended to improve infrastructural links in the region.

“This bridge will connect the two economies and Bosnia and Herzegovina with the European Union. We expect that the works will be completed in May next year and that the bridge and the border crossing will be fully functional in the next year to a year and a half, following the completion of the access roads. We launched the initiative to have an integrated border crossing, which would be one of the first of its kind between the EU and the countries of the Western Balkans,” said Minister Mitrović.

Tomislav Mihotić noted that following the opening of Svilaj bridge, the bridge will be an important connection between the countries, due to its unique geographical position. “In addition to faster traffic, the new bridge will improve the economic growth of both countries and Bosnia and Herzegovina will be closer to Europe. We hope to continue cooperation and jointly realise other projects in the River Sava region to integrate and connect the region,” said Mihotić.

“This bridge will not only connect the two countries but also the Western Balkans with the European Union. Once fully completed and functional, 2,400 vehicles will cross it daily, which will improve the border crossing capacities and bring together the countries’ economies. This bridge is a symbol that Bosnia and Herzegovina is connecting with its neighbours, with the European Union, with Europe and that is exactly what we want,” remarked Matej Zakonjšek.

Recently, another bridge and border crossing on river Sava were opened at the Corridor Vc section Svilaj-Odžak, thus making the transport between the countries even easier. The European Union has so far allocated over €225 million in grants for 13 projects in the transport sector in Bosnia and Herzegovina along Corridor Vc, connecting Bosnia and Herzegovina with EU capitals and bringing people and countries closer.

More about the Corridor Vc in BiH

More about the WBIF activities in BiH