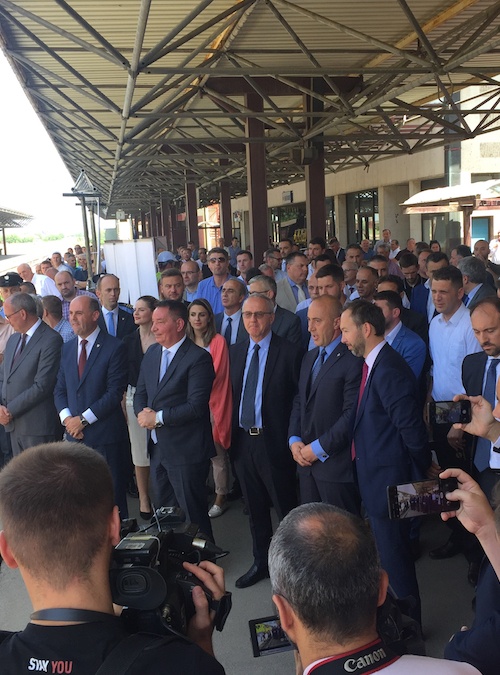 Ground-breaking Event for the 2015 Connectivity Project in Kosovo*

On 2 July 2019, the EU Office in Kosovo in cooperation with the Public Company 'Infrakos' organised a ground-breaking event for the construction of the WBIF supported Connectivity Agenda project ‘Railway Route 10: Section Fushë Kosovë/Kosovo Polje – Border with North Macedonia’. Railway Route 10 is part of the Indicative Extension to the Western Balkans of the TEN-T Orient/East-Med Corridor.

The railway track is in a poor condition since there were no major renovations and proper maintenance work since the 1970s; these factors combined have caused serious structural constraints that limit traffic to 60km/h. Frequent delays and cancellations accordingly take place, which in turn hampers the economic growth of Kosovo.

Route 10 in Kosovo will be rehabilitated in three phases:

Prime Minister Haradinaj emphasised the preconditions, required for the socio-economic development of Kosovo: "We are building on the three pillars - comprehensive business development plan for Kosovo, human resources through education of the market required working skills of the new generation and last but not least - development of the infrastructure to connect us to the region and the European Union. Thanks to the EU taxpayers, we are able to make progress on all three levels."

Mr Brusa from the EU Office said: "The WBIF is one of the most important facilities for socio-economic development of the Western Balkan region. For Kosovo, the open borders and efficient connection are crucial. This project is a good example of joint and coordinated activities of the international stakeholders and the beneficiary. At the end of this week, we are looking forward to the endorsement of the Connectivity Package at the Western Balkans Summit in Poznan, which is taking place on the 5th of July."

CEO of Infrakos, Mr Thaçi: "Since 1974, there was no renovation of the railways, which were poorly maintained. Therefore, the WBIF supported project, the biggest EU support to Kosovo so far, is of such importance for our connectivity, providing the transport of passengers and goods."

Minister of Infrastructure Mr Lekaj: "I would like to sincerely thank the European Union and the International Financial Institutions, EBRD and EIB for their dedication to making this and other infrastructure projects a reality in Kosovo."

Mr Neil Taylor, EBRD: "When Kosovo became an EBRD shareholder, this was the first project signed. I would like to congratulate the national institutions for "moving the train forward". The railway will enable easier import of cars and machinery to Kosovo and export of furniture and minerals to international markets. I am looking forward to the moment when also the people of Kosovo can travel visa-free."

The Orient/East-Med Corridor in Kosovo

The Orient/East-Med Corridor traverses Kosovo from the north to the south, from the border with North Macedonia to Serbia, and constitutes Kosovo’s sole connection to the wider region by rail. Route 10 is part of the extension of the Core Network Corridors of the Trans-European Transport Network into the Western Balkans. The Extension of the Orient/East-Med Corridor in the Western Balkans has a total length of 256 km, out of which 149 km are in Kosovo. The entire track in Kosovo is in a poor condition, with serious structural limitations that do not allow for traffic in excess of 60km/h and in some areas it is limited to 30-40 km/h. The groundbreaking event concerns Phase 1, which will enable outdated switches, tracks, track bed, culverts, bridges and tunnels along the Fushë Kosovë / Kosovo Polje – border with North Macedonia route to be replaced/renovated.

The WBIF has supported 20 projects with an estimated value of €940 million in Kosovo. The country has benefited from 32 grants for technical assistance and investment works with an overall value of €111.2 million, out of which €100.2 million from the EU and €11.0 million from other donors. The WBIF financial institutions have extended a further €232 million in loans signed on 10 projects.

* This designation is without prejudice to positions on status, and is in line with UNSC 1244 and the ICJ Opinion on the Kosovo Declaration of Independence