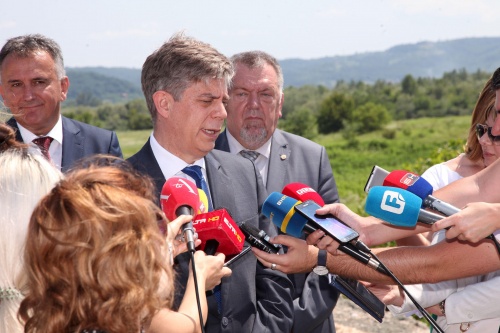 Ahead of the Western Balkans Summit in Poznan, the Head of the EU Delegation and EU Special Representative in BiH, Ambassador Lars-Gunnar Wigemark visited the newly opened construction site for the Johovac Interchange – Rudanka Interchange motorway section on the Mediterranean Corridor (Corridor Vc) in Bosnia and Herzegovina.

The 6-km motorway on the Svilaj to Doboj section of Corridor Vc, between Interchange Johovac, in Tovira, and Interchange Rudanka in Kostajnica that will be built through this project, including the interchanges and a two-lane 1-km long access road in Kostajnica, over the River Bosna, will provide motorway access to the existing local transport network. Once complete, it will ensure direct connection to Bana Luka – Doboj motorway and to the existing M17 main road in Bosnia and Herzegovina.

The total estimated investment costs for this section are approximately €80 m, out of which €15 m will be covered from the EU grant allocated under the Connectivity Agenda through the WBIF in 2017. The European Bank for Reconstruction and Development (EBRD) has extended a further €58.9 m in loan to complement the national contribution.

On the occasion of the visit, the officials maintained:

The works are estimated to be completed by mid-2021, and more than 500 jobs will be created during the construction as well as operation and maintenance periods. The new highspeed road will provide direct access to safer and faster transport routes for more than 1 million people, while the annual average daily traffic is estimated to increase by more than 50%, matched by adequate safety and security conditions. It will also improve trade flows with countries in the region and thus have a positive impact on the broader economy of Bosnia and Herzegovina.

The Mediterranean Corridor links the Iberian Peninsula with the Hungarian – Ukrainian border. Its extension into the Western Balkans, mostly associated with what is regionally known as Corridor Vc, connects Central Europe, specifically Hungary and eastern Croatia, to Bosnia and Herzegovina and the Adriatic Sea.

With a total length of approximately 335 km, Bosnia and Herzegovina contains the longest section of Corridor Vc. In response to the high daily average traffic volumes, Bosnia and Herzegovina has embarked on a multi-billion-euro motorway construction programme, in cooperation with its neighbours. To date, 35% is already built or under construction.

Recognising the importance of this infrastructure artery and the significant financing needs, the European Union has committed €110 m in grants since 2015 through the WBIF to co-finance eight projects on Corridor Vc and support the implementation of the Connectivity Agenda in Bosnia and Herzegovina. This EU assistance contributes to the priorities of the Connectivity Agenda with focus on the preparation and financing of regional infrastructure investment projects and the implementation of technical standards and reform measures, such as simplifying border crossing procedures, road safety and railway reforms.