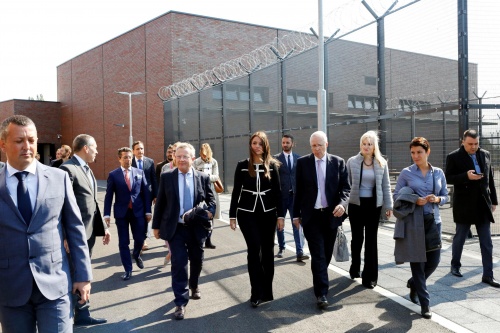 Official opening of Pancevo Penitentiary-Correctional Facility, one of the most modern prisons in the region

The new prison facility, with capacity for 500 inmates, was built between May 2016 and May 2018 in line with the modern standards of the European Prison Rules and is comparable with the most modern European Union correctional facilities. The value of construction and equipment is €23 million; the Council of Europe Development Bank provided a loan of €18 million and Serbia contributed €5 million from the national budget. The Western Balkans Investment Framework (WBIF) contributed €3 million in grants for technical assistance, which have been made available by the EU (€1.6 million) and Bilateral Donors’ contributions (€1.4 million) to the Framework.

The prison in Pancevo was opened by the Serbian Minister of Justice, Nela Kuburovic. The opening ceremony was attended by the CEB Governor, Rolf Wenzel, the Deputy Head of the EU Delegation to Serbia, Mateja Norcic-Stamcar, and the OSCE Head of Mission to Serbia, Andrea Orizio.

"Currently we are in the middle of the process of employing an additional 170 staff, and by the end of 2018, all inmates from the old Pancevo prison will be moved to the new premises," said Minister Kuburovic.

Governor Wenzel emphasised that “we are impressed with the efforts of all the involved stakeholders. The cooperation with the Ministry of Justice was very efficient, and to be honest, I did not believe the prison would be built in just two years, following the European Prison standards."

Ms Norcic-Stamcar, the Deputy Head of the EU Delegation to Serbia, added that "as the largest donor in Serbia, the European Union is supporting the comprehensive reform of the judicial system in Serbia, and we are very satisfied with the cooperation with national institutions."

The correctional facility will have approximately 250 employees and also a small training centre for staff within the Employee Facility, which will benefit the staff working in the facility. The cells are equipped mainly with furniture produced internally in the Serbian prisons. This resulted in significant savings in relation to market prices, in addition to engaging convicted inmates in line with the VET program that aims at their resocialisation and reduction of the rate of return.

The Prison Facility also has a special medical unit with several hospital rooms for patients who are not seriously ill, with ultrasound and a dental office. The correctional facility has a sports block with a hall containing a basketball playground and gym, as well as an auxiliary building with space for voluntarily workshops to employ convicted inmates. The workshops are very important for the Administration in order to work on training convicts through several programs that are attractive for employment after the termination of the prison sentences, in accordance with the Strategy on Execution of Criminal Sanctions until 2020 and related action plans.

Technical assistance funded by the WBIF has supported the preparatory activities of the project, including the elaboration of the feasibility report and operational plans; launch of a call for proposals and a competition of design ideas; provision of the complete design documentation; organisation of study tours and capacity building activities for staff members of the Ministry of Justice to introduce them to contemporary EU prison practices; and, the supervision of the construction works.