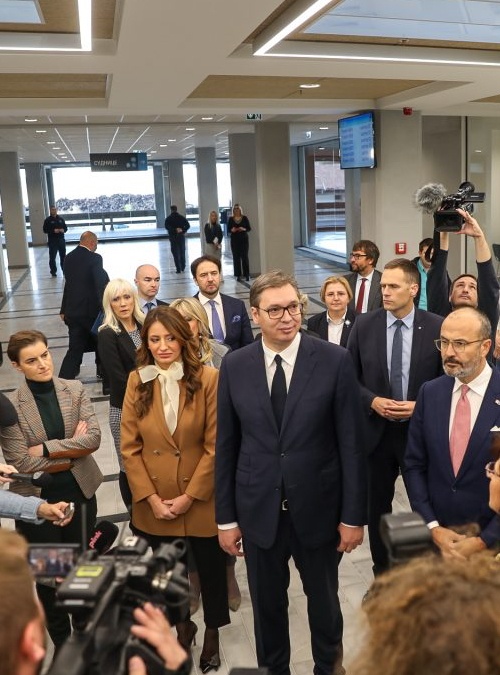 Official Opening of the Refurbished Largest Judicial Building in Serbia

The opening ceremony was attended by the Head of the EU Delegation to Serbia, Ambassador Mr Sem Fabrizi, the President of the Republic of Serbia Mr Aleksandar Vučić, the Prime Minister Ms Ana Brnabić, the Minister of Justice Ms Nela Kuburović, the Minister of European Integration Ms Jadranka Joksimović, representatives of the European Investment Bank and the judiciary.

The new Palace of Justice provides 26,000 m2 functional modern working space; modernized equipment and efficient work-flow methods will allow judges, prosecutors and staff to increase their work efficiency significantly; people will therefore benefit for their claims will be processed quicker; this, in turn, will increase people’s trust in the rule of law.

The refurbishment of the Palace of Justice in Belgrade is part of the comprehensive WBIF project "Upgrading and Reconstruction of Judiciary Facilities in Serbia" which supports the ongoing National Judiciary Reform Strategy in 20 cities and improves working conditions and the efficiency of judicial authorities. The overall investment of the “Palace of Justice” over €84 million was provided through the €41 million EIB loan, four EU-grants through the WBIF with a total value of €3 million, all aimed to support implementation of a priority project based on the key strategies of the judiciary sector. The EU-grants included also the supervision of works on the Palace of Justice, implemented by IPF5 from February 2017 to November 2019.

EU Ambassador Mr Sem Fabrizi: “This building is a true example of the rule of law, which is today more than ever the foundation of any democratic society. The EU supports and cooperates with judicial authorities in Serbia and together with the Supreme Court of Serbia, we have recently managed to reduce the backlog of 1.2 million cases. But efficiency is only part of the reforms. Independence and accountability are crucial in ensuring the justice for all.”

President of Serbia Mr Aleksandar Vučić: “In regard to the rule of law in Serbia, still a lot remains to be done. We are thankful for the EU taxpayers’ money. We will continue to build facilities, reconstruct facilities in Serbia, and I urge you to continue to support us in this and to provide even more assistance and support in the future.”

Minister of Justice Ms Nela Kuburović: “After 29 months, the reconstruction of the Palace of Justice has been completed, one might say that it is a long period, but I must remind you that it is the largest infrastructure investment of the Ministry of Justice in the last 40 years.”

President of the High Court in Belgrade, Mr Aleksandar Stepanović: “The employees of the Palace of Justice will now have incomparably better administrative and technical conditions for work, all following international standards and recommendations of the European Commission. Today is not only a day of moving into a building that is equipped to the highest standards of the European Union but also a step forward in the area of government law and basic democratic principles in Serbia.”

Short video on the Palace of Justice © EU Delegation to Serbia

More about the WBIF Project "Modernisation of Judiciary Facilities: Supervision of renovation works of the Palace of Justice" here and here.