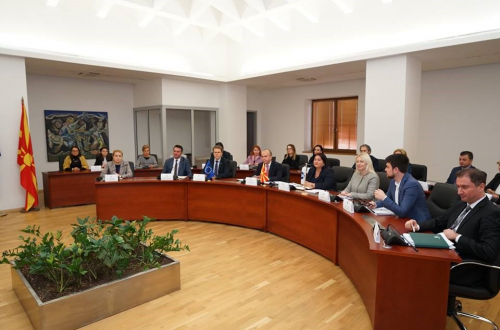 Signature of the 2017 Connectivity Agenda Grant for North Macedonia

The grant agreement for North Macedonia under the 2017 Connectivity Agenda investment package was signed in the presence of Goran Sugareski, Minister of Transport and Communications, Dragan Tevdovski, Finance Minister, Samuel Zbogar, Head of EU Delegation, and Anca Ionescu, Head of the EBRD Office in Skopje.

The €70 million EU grant provided through the WBIF has leveraged an overall investment in excess of €152 million and will support the rehabilitation of approximately 34 km of railway network on the Beljakovce – Kriva Palanka section of the railway Corridor VIII, part of the Orient/East-Med Corridor, in the country. The new developments represent the second phase of the project for the rehabilitation of the eastern part of Corridor VIII, the 89 km-long rail section between Kumanovo and the border with Bulgaria.

The grant follows sovereign loans of €46.4 million and €145 million provided by the EBRD and builds on previous WBIF technical cooperation grant support of €5.7 million for project preparation and implementation.

The first phase of the project, the rehabilitation of a rail section approximately 31 km in length between Kumanovo and Beljakovce, is under implementation. For the second phase, the selection of the contractor for the construction works is underway. Once complete, the new railway interconnection will shorten the railway link between North Macedonia and the Black Sea by approximately 200 km.

More information on the project can be found here. Additional details on the signature event may be retrieved from here and here.