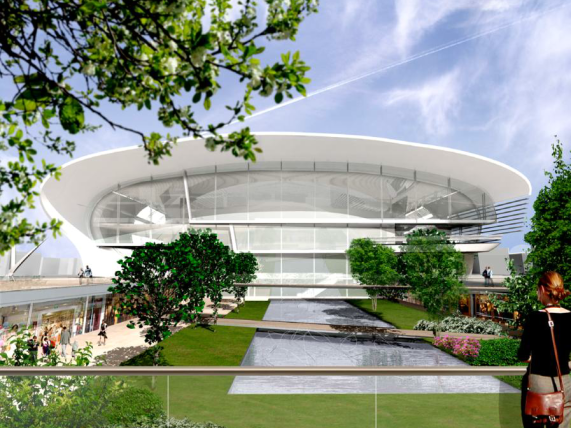 Although Mostar is home to a large number of cultural societies and sporting clubs, it lacks sufficient capacity for cultural and sporting events, as present facilities are almost non-existent or are inappropriately small for the city of its size. This project relates to the construction of a cultural and sports facility, CSC Integra, in the city of Mostar with the aim of helping with the integration of three ethnic communities following the 1990’s war, while also providing quality sports and cultural assembly and exhibition facilities.

The planned CSC Integra will have a total of 46,000 m² of useful space, out of which 24,000 m² will be an underground parking area and 12,000 m² cultural and sports facility space that will include office and entertainment provision. The building will offer 4,000 seats and garage facilities for 600 parking places. The project is challenged by a small land plot and its central city location, thus making traffic management difficult.

The project is carried out in three components that included:

The facilities will benefit the population of the City of Mostar and its surrounding area, especially the youth and amongst them the disadvantaged and disabled population. The direct beneficiaries include some 18,000, including 3,500 members from approximately 50 cultural societies and 15,000 members of 105 sporting clubs.

Social benefits include a decrease in delinquencies, and drug and alcohol abuse that is widespread due to the lack of recreational facilities Mostar. Moreover, the centre will extend to the wider community allowing educational and civic use, as schools and universities are expected to utilise this facility for cultural, sport, and other events together with 40 cultural civic groups and 120 sporting clubs. The ultimate benefit of the project is the development of a social infrastructure platform that will facilitate the integration of divergent ethnic and social groups. The project should fill the gap in the provision of cultural, sports and assembly capacity, strengthen social integration by improving living conditions and quality of life in the urban area of Mostar and contribute further to the creation of conditions for sustainable development of this highly important city for the whole southern region of Bosnia and Herzegovina.

The technical assistance for project preparation phase is now completed and CEB is waiting to receive a formal loan application from BiH authorities. However, given the political situation in the country, and the Mostar constitutional deadlock, in particular, it is unlikely that the City Council would be in place to submit a request for a loan anytime soon.

In addition to WBIF technical assistance in the preparation phase, funding was provided by the Embassy of Netherlands and CEB-managed Norway Trust Account.