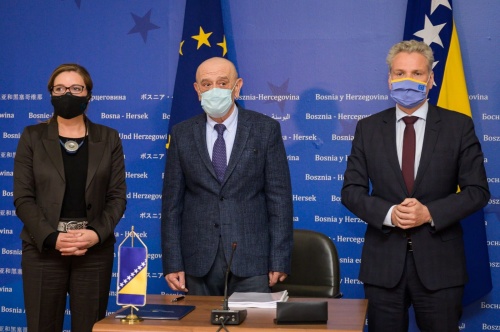 The construction of Corridor Vc, a key infrastructure project in Bosnia and Herzegovina, is progressing with new financing from the European Union. On Wednesday, Ms. Manuela Naessl, Head of the European Bank for Reconstruction and Development's (EBRD) operations in Bosnia and Herzegovina, and Mr. Vjekoslav Bevanda, the BiH Minister of Finance and Treasury signed two agreements for an additional €20.9 million in EU grants to support the completion of two sections on Corridor Vc: Buna-Počitelj and tunnel Zenica-Donja Gračanica. Ambassador Johann Sattler, Head of the EU Delegation to BiH and EU Special Representative in BiH also attended the signing ceremony.


The EU funding consists of a €15.4 million investment grant that will co-finance the construction works, as well as €5.5 million for technical assistance. The grant funds, secured through the EU-supported Western Balkans Investment Framework (WBIF), complement an €80 million loan previously extended by the EBRD for the construction of the two sections. Bosnia and Herzegovina is contributing €7.2 million to the total investment costs of €108.1 million. The works on the 7.2 km long Buna-Počitelj section and the 4.1 km Zenica Tunnel-Donja Gračanica section, including the construction of a tunnel, two viaducts, an interchange, and a toll station started in 2018/2019 and will be completed by June 2021.


Corridor Vc is being built in accordance with modern transport infrastructure standards, which will contribute to improved road safety in BIH; it obtained a three-star safety standard by the International Road Assessment Program - one of the first projects in the region to receive such a high ranking. The project enhances the sustainability of motorway construction and management, as well as procurement procedures in the public motorway company.

The construction of Corridor Vc in Bosnia and Herzegovina is a priority investment Flagship 2 "Connecting North to South", as identified in the Economic and Investment Plan for the Western Balkans, within the investment window "Sustainable Transport". The 325 km motorway will cross the country from the border with Croatia near the port of Ploče in the south to the border with Croatia in the north, contributing towards a more inclusive economic and social development. 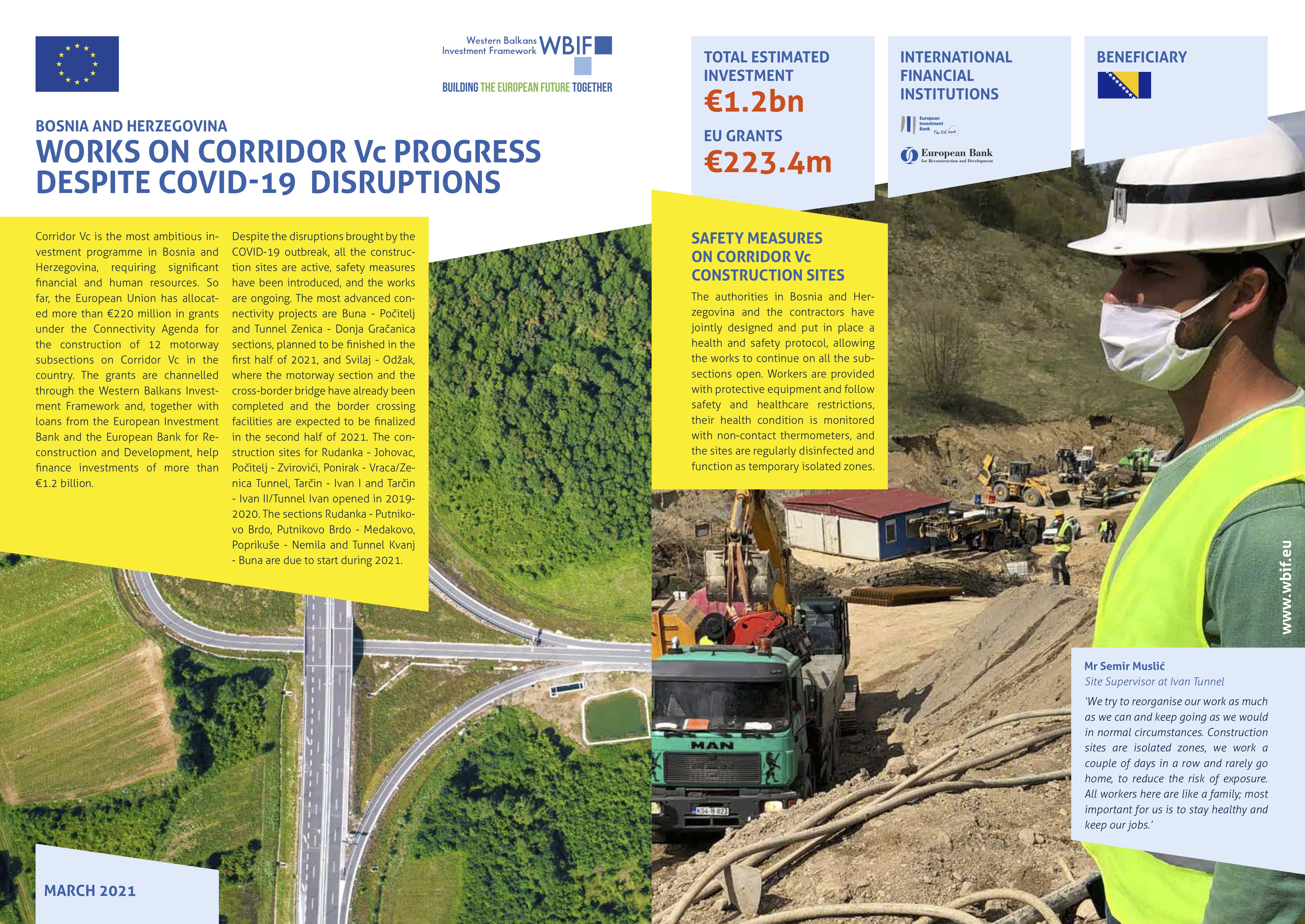 Ambassador Johann Sattler, Head of EU Delegation to BiH and EU Special Representative in BiH, said: “Today’s grant agreements are a clear sign that the EU stands by its Western Balkan partners, whether in fighting the pandemic or building motorways. We continue to support BiH on its way to EU membership also through the integration of the national motorways into the Trans-European Transport Network (TEN-T).”

Ms Manuela Naessl, EBRD Head of Bosnia and Herzegovina, said: “We would like to thank the EU, our key partner in this project, for the additional funding. Large-scale infrastructure investments such as Corridor Vc require significant investments and EU grants are important in making them affordable. We are encouraged by the progress of the construction process and we look forward to celebrating the completion of works on both sections later this year”.

Mr Vjekoslav Bevanda, Minister of Finance and Treasury of Bosnia and Herzegovina, said: “Everyone in Bosnia and Herzegovina is aware of the importance of Corridor Vc, since it will improve access to the Adriatic Sea and to the European Union. Modernisation of motorways is an opportunity to boost our economy and enable safer and faster travels for our citizens.”

More about the WBIF activities in Bosnia and Herzegovina