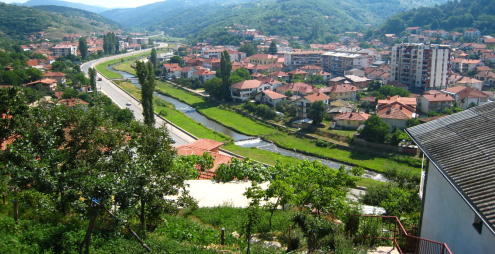 This investment project concerns the rehabilitation and expansion to three lanes of a 13.2 km-long single two-lane carriageway road section on the Orient/East-Med Core Network (Corridor VIII) in North Macedonia, from the town of Kriva Palanka to the Deve Bair border crossing point with Bulgaria.

Travel conditions on the existing road are poor, with a maximum speed of 50 km/h along most of its length, inappropriate drainage and rest areas, as well as several sharp curves.

The works involve both rehabilitation and reconstruction, expanding the road to add a third lane, including on three existing bridges. This will allow for more efficient and safer driving for the people living along the Kriva Palanka – Deve Bair route as well as for those transiting to and from Bulgaria.

The project is at implementation stage, with detailed design, urban, environmental and construction permits already secured. An environmental and social impact assessment report has also been developed as well. Land ownership issues have been addressed and a stakeholder engagement plan and a resettlement action plan have been prepared, in accordance with EBRD requirements.

The WBIF co-finances the investment costs with a €2.47 million EU grant under the 2018 Connectivity Agenda package.